Nitro Type v3, or v3, was a site-wide update that occurred on June 5, 2019. Alpha testing for Gold Members started on March 8, 2019, and open beta testing began on May 3, 2019. The updates included a completely new site redesign and a new track.

In May 2017, Travis announced that there would be a new track. It was said that the graphics of the new track would look cleaner, support larger friend races, and have a different font from the current one. [1]

In addition to the new track, every single page of Nitro Type was redesigned. This was first officially announced in August 2018. [2] In October 2018, there was a news post that showed users what the garage page would look like. This was met with mixed opinions. [3] On March 8, 2019, the new site was released to the public. On June 5, 2019, this new look was pushed to the main site.

On August 30, 2019, the navigation bar and logo were changed altogether on the test site: like the 2.0 design, the navigation bar was separated into individual, adjacent buttons instead of half of them being stuck behind the "My Stuff" drop-down, and the logo was centered on the page with a larger size on top of the buttons rather than right next to them. In addition, a link to the teacher portal appears on every page if the user is not logged in, and a new loading screen was added.

Original NT 3.0 garage lot design, which is slightly lighter than the current one. 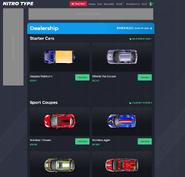 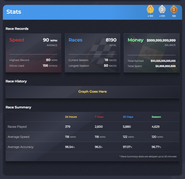 NT 3.0 Profile view. This was shown by Travis on Discord, when Travis asked which design should be used for when you view a user profile(Left or Right).

Collecting a new achievement on V3

Achievement after you achieve it 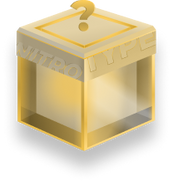 Logo Given by asssa123 on the news