Bots are "racers" who are controlled by AIs. A bot appears after an amount of time when no racers join a race. This time depends on the speed range that the race is in, and can range from 0-5 seconds. The only bot that this rule does not apply to is The Wampus, which comes into the race one second after the fourth racer joins. Bots' cars range from Starter Cars to Muscle Cars (excluding the Liberty '69 Shellback RT-500 and the Liberty Fastback) and can have any paint job. All bots except The Wampus, which uses the "You’ll Never Beat Me!" title, use the "Nitro Type Bot" title. During the Xmaxx events, bots would sometimes use the Rocket Sleigh instead of their normal cars. Bots can also be used by admins when racing. Players can not find their average speed, top speed, profile, level, or anything else related to them.

"Ghost racers" is a term that was coined by the community for racers who "race" regularly, yet their stats stay the same. Their join dates continually move closer and closer to the current date, despite the account creation date being years earlier. Despite the fact that ghost racers can be seen in races, the user(s) who created the accounts are not actually racing. Looking into the source code of ghost racers' profiles will find that despite their join dates being very recent, their most recent races were done prior to the year 2014. Considering that ghost racer accounts all seem to meet specific criteria, most notably that not a single ghost racer owns gold membership, it is plausible that they are a feature implemented by Nitro Type to make the race track appear more populated than it actually is.

Here is an example of a ghost racer. If you are in their WPM zone, you are likely to find them in a race sooner or later, yet their stats show that they have not done any races within the past month. For example, on December 11, 2018, this ghost racer’s join date showed up as "November 30, 2018". Going to their profile now will show something more recent.

Ghost racers are listed as bots on Nitro Type's real-time page in the admin panel. Additional testing has also revealed that ghost racers' accounts have likely been locked and unable to be accessed by their original owners. 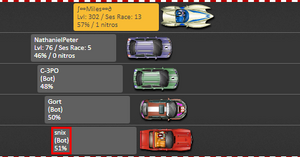 A ghost racer being listed as a bot
Bots
Community content is available under CC-BY-SA unless otherwise noted.
Advertisement